started a topic over 7 years ago
Would be great if the seconds between app swichting in Auto-Scroll can be user specified.
29 people like this idea
14 CommentsSorted by Oldest First

We are working on the possibility to choose different time of visibility for apps in auto-scroll mode.

said about 7 years ago
What about changing it so instead of being based off a set time amount it changes app once all data in the app has been displayed once. For instance, the IFTTT app scrolls the same thing numerous times if there's only one set of data for it. It could switch to the next app once that one (or however many) set of data have displayed and scrolled.
1 person likes this
C

The problem with that idea Kevin is that some apps can fit all the data on the screen at once.  For example, the weather or the clock.  If the data doesn't scroll and the unit just waited until all data was displayed it would flip almost instantly.

I've been waiting for this since I received my Lametric, it's a must have feature. I'd like to have control per app, and it also seems logical to have a similar option for notifications per app, i.e. I want this app to repeat notifications 10 times, 5 times, 2 times etc etc. For example I don't want to miss my IFTTT notifications so would like the option to repeat it x times (with sound)...

any update?? guess not

Hey guys, in the latest firnware 1.2.0 there is an ability to hide apps in autoscroll mode and increase time they are displayed before navigating to the next app. Check it out. Your feedback is appreciated. Thanks!

I've tested this and it's better.  It does properly show announcements, but then 'skips' the program during the normal scroll.  It's a little complicated to figure out how it make it work at first, and I'm still not sure that the other options at the bottom are for.

This id definitely a step in the right direction, but I'd still like to be able to specify how long each screen shows on the display before flipping to the next.

Ideally there would be two timing options:

The first setting would be for total time that a particular app will appear on the screen before LaMetric rotates to the next app.

The second setting would allow a user to specify how long to wait before scrolling (assuming scrolling is needed).

For example, right now I'm using the notepad app to show to display an animation I created, and the text associated with it is "Baby it's cold outside!".  My animation runs for maybe 1.5 seconds I think, but because the text scrolls it moves before the animation is done.  I'd like to have it native it any app I install that I can setup this:

Obviously the times would be settable by the user.  This way I can have my animation run completely before it starts to scroll.

Just my two cents on how I'd like to see it work.  Obviously other opinion might be different, but FWIW there's my opinion.

Oh, and side note: Is there anyway to make the animation always start from the beginning when the app is displayed?  I feel like sometimes my animation starts halfway through.

said about 3 years ago
Any update on this?
G

said over 2 years ago
Any update or chance you could respond please?
A

said about 2 years ago

Any update on this at all?

said over 1 year ago

I'm experiencing the same situation as Chris B did, and I believe their solution for a fix is the right way to solve this. But that was over 5 years ago, and this level of customizability still isn't there. The timing options for Auto-Scroll mode are nice, but they still don't fix the problems described here. Really wish this could get elevated.

said about 1 year ago

This is flagged as implemented, but on clock running 2.2.2 and iOS app 2.7.3 this isn't available.

When can we expect to see this feature?

Hi, I have the Lametric Time updated and also the app, but I can't find a way to control the scroll time and I would prefer to be able to make each app last 1minute for example?

Currently, it is not possible to change the Auto Scroll apps time. But you can make app stay 2 or 3 times longer than others by dragging the corresponding ‘eye’ icon 2x or 3x: 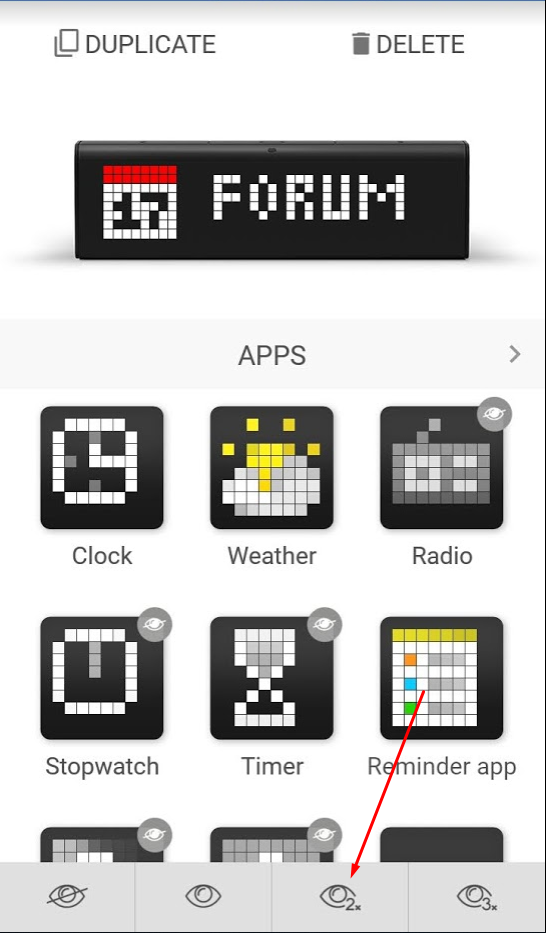